Taking a screenshot of a page or a view, whether it’s from a web page or an app is very useful. If you need to retrieve important information, all you got to do is check your gallery for your screenshots. However, for some reason instead of capturing a screenshot, something you’ll get an error instead: “Unable to Capture Screenshot. Prevented by Security Policy.

Samsung users usually got this problem. Yet, it’s not all about the strict security of the phone manufacturer. In most cases, it’s how the app or the website is designed. It’s programmed in a way that you cannot take a screenshot. So, this article will try to explain the reasons why you can’t capture screenshots and how to take a screenshot whenever you need to.

Why Can’t You Take a Screenshot?

Android devices running on Android 4.0 (Ice Cream) and later have the screenshot features. You can take a screenshot by using combo buttons such as the following:

You can also use gestures for some smart devices. Likewise, you also navigate through the Settings and tap screenshot option if you don’t know the shortcut. There are three major reasons why you can’t take a screenshot with your smartphone — restricted by the app, enforced phone policies and you’re in Incognito mode. 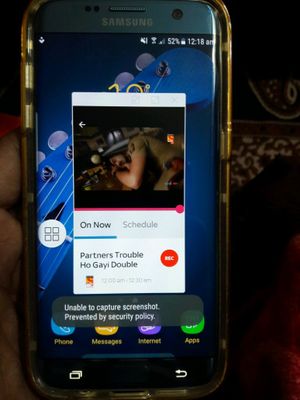 Restrictions on the App

Capturing screenshots for mobile banking, investing and finance apps are disabled by default. Restrictions apply on these apps, and to prevent the capture of important personal information. In most cases, these apps contain restrictions from the code-level. You can’t do anything unless you use third-party apps to snap a screenshot, which you can use at your own risks.

Definitely, you can’t take a screenshot if you are using the Incognito browser. Especially the Incognito Mode in Google Chrome, screenshots are prevented and no way to disable this feature. Using alternative browsers like Firefox or Safari solves the problem.

It’s a possibility that restrictions are set in your Samsung phone itself. For example, if it’s provided by the company or school, screenshots could be disabled for some apps and web pages. You may check from the Settings>Accounts or you may coordinate with your IT department if you want to capture screenshots on your device. 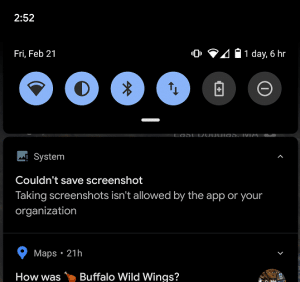 Workarounds and Quick Fixes to the Problem

If it’s how an app or website is being designed not to allow screenshots, there are some alternatives and workaround that you can try. Depending on the Samsung device that you have — you can start by checking the Settings or to riskier workarounds. Just note that if you’re using Knox or Secure Folder (and the like) it won’t allow screenshot capturing.

Give that app certain permission. Go to Settings (of your phone)>Apps. From there, find the app that you have problems capturing the screenshot. Now tap the app and go to Permission. Then, enable permission for Storage.

Another recommendation suggested by some users — update security policy. Go to Settings>Lock screen & Security>Other Settings>Security Policy Updates. Alternatively, you can make a quick search in Settings and key in security policy. 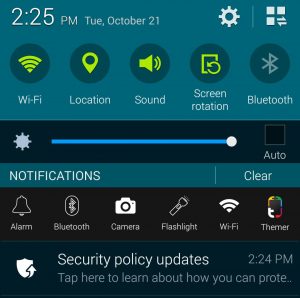 If you encountered the problem on an app, try accessing the web version of it. If the app has restrictions, so long as you won’t use Google Chrome Incognito, you’ll be able to take a screenshot of the page you’re trying to capture.

Project Smartphone Display to Another Phone

This might be some kind of work, but if you need to take a screenshot, you could use TeamViewer app. Install the app on both phones and connect them using the same TeamViever credentials. You can now see the display on one phone to the other. Display the web page or app details you need to take a screenshot and from the second phone, snap a photo. Since the restrictions are only on the host phone, you can capture the screenshot from the other phone.

Use Third-Party apps (Use at Your Own Risk)

There are different third-party apps capable of bypassing security and taking screenshot even for banking and investing apps. An example would be Private Screenshots . However, using third-party apps could breach the security of your phone.

Almost all Android mobiles nowadays are capable of taking a screenshot. Restrictions and limitations, especially when the screen to be captured contain personal and sensitive information is there to keep you secure. Yet, if for some reason you badly need to take a screenshot on certain web pages or apps, you can encounter, “Unable to Capture Screenshot. Prevented by security policy.”

Samsung smartphones are among the devices where you can get such warnings. It could be that the app has certain restrictions or you are accessing a website via Incognito mode. Yet, for mobile apps, sometimes you just need to extend permission or get updates to the security policy to capture screenshots. Desperate measures include using third-party apps, but that’s highly discouraging. Try all the workarounds we offered here and let us know in the comment which of them works for you.