SOLVED! - OK Google While Screen is Off — Tricks to Get the Most Out of It

To answer to Apple’s Siri and Amazon’s Alexa, Google has an Assistant that is as useful as the first two assistants. It’s compatible with almost all Android mobiles, as well as, iOS devices with Google Assistant app. From controlling smart devices, playing music, setting reminders, sending a message, and more, Google Assistant can help you. Yet, you don’t want to keep pressing the power button to activate it, do you? In this article, we’ll teach walk you through Google Assistant and how to say OK Google while the screen is off.

Google Assistant and Your Smartphone

Before getting too excited using smartphones without even lifting a finger, ensure your phone is Google Assistant-compatible. Although almost all Android devices are, it’s better to check to make sure it’ll work – 100% every time.

But actually, there’s a catch to that. While you have Google Assistant in nearly all Android smartphones available, not all of them allow OK Google while the screen in off. It’s a security risk, of course, but on another note, it is great especially for making quick actions. Or, you are so busy or occupied to reach for your phone that sending voice commands to phone is beneficial. 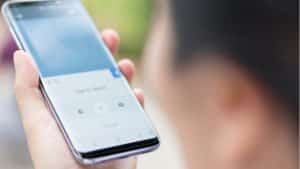 Once you are sure that your phone works well with Google Assistant and you have checked the Google account used, it’s time to set it up.

Setting Up OK Google While Screen is Off

Go to Google App (either by pressing the power button or via Settings>Apps). Then, go to Settings>Google Assistant>Settings>’Ok Google’ detection. Now, you may enable the option ‘Say “OK Google” anytime’.

Alternatively, you can also find in other smartphones the Voice Match settings. That also means the same – allowing voice commands for the Google Assistant. Go to Settings>Google>Search, Assistant & Voice>Voice>Unlock with Voice Match. You can find the option Access with Voice Match. By simply saying OK Google, you can unlock your phone or activate Assistant even when you are using another app.

Unfortunately, some smartphones explicitly say otherwise. Go to Google App>Settings>Assistant>Assistant Devices. Under Assistant devices, you can find Phone. Tap it and it’ll redirect you to further options. One of which is Voice Match with the specification to use OK Google when your screen is turned ON. 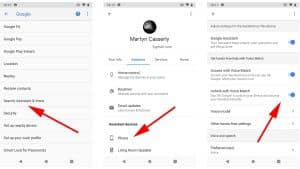 What it means by that is, you can still use OK Google, but not when the screen is off. Kind of limiting, but there’s nothing else you can tweak from the phone’s settings, unless…

While there’s no way you can force Google Assistant to wake the phone up by saying OK Google, there is still one way to do it hands-free. If you can see, when you open the Google App>Search, Assistant & Voice>Voice, you can see Hands-free options. One is to Allow Bluetooth requests with device locked and Allow wired headset requests with device locked. 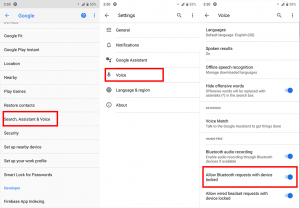 Once you can successfully unlock the screen of your device, now, you can use OK Google. Although the alternative didn’t fall on saying OK Google when the screen is off, it’ll be another way if you want a hands-free operation. Hence, this method is included.

Just like any other app, Google App also needs you to free up some space for maximum performance. Therefore, go to Settings>Apps>Google App. Tap the app and go to Storage. From there, you can see Clear Cache and Clear Data. Hit these buttons to make sure everything is optimized.

Just saying OK Google when the screen is off to execute several tasks is very advantageous. It’s convenient, easy to set up, and extraordinarily amazing. It’s just unfortunate that some users aren’t allowed to set their phones to open up using OK Google.

Lucky you. A few steps and tweaks of the settings make your life easier. However, if don’t have the option, alternatively, you can use the Bluetooth connection to wake up your device. Still, a hands-free way to unlock your phone and from there, use the OK Google voice commands to multitask and ease your life.

Cloud-Based Mobile Testing Tools – What You Should Know

How to Return Sprint Airave