How to Fix Screen Mirroring Lag

Screen mirroring is a great way to display anything and everything on your mobile phone to a much bigger screen, say a television. No need for any dangles and cables as this feature can be done wirelessly. Unfortunately, not all devices are capable of screen mirroring. And, even though some devices support such a feature, yet, users still complained about screen mirroring lag. So, how to fix screen mirroring lag? Read on to learn more about the ways to fix this problem.

What is Screen Mirroring?

Before we delve into the details about the screen mirroring problem, let’s first understand what screen mirroring is. Screen mirroring allows you to project photos, videos, games, and more from your smartphone, Windows, or Apple device to a bigger screen. You connect it wirelessly to your smart TV or media projector via Miracast.

Miracast is a wireless standard display present in Windows 8.1, Android 4.2, and later versions. In addition, this protocol is also present in some devices running on Amazon’s Fire OS and Microsoft’s Windows Phone 8.1 and later.

You shouldn’t confuse screen mirroring from screen casting. The former seems to clone the screen of your phone to the TV, which is done wirelessly. The latter, on the other hand, refers to casting video to your television. With screencast, you can just tell the TV what to play and it’ll load on the TV without a problem. The former could have some delays, while the latter doesn’t have any.

Requirements to Do Screen Mirroring

The operating system requirement has already been mentioned in the previous chapter. Yet, not all devices running on these operating systems have screen mirroring. Again, it depends on the make and the maker of your mobile phone. 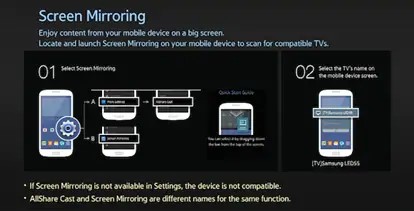 Both your phone/laptop and your TV/projector should support screen mirroring for this to work. If you can’t find any setting that refers to this feature, check the documentation of your phone or have a quick Google search on this. You don’t need to have an internet connection to get this feature to work. You can use the built-in Wi-Fi and connect the two devices even without the internet. In addition, you can also use a Bluetooth connection.

Unfortunately, not all devices work harmoniously with each other. Even though both your smartphone and your TV or projector have this feature doesn’t mean they are compatible with each other. With your iPhone, Apple made sure that it can mirror the media to Apple TV without a  problem. But, for Android and Windows mobile?

How to Fix Screen Mirroring Lag?

From the requirements mentioned above, it seems that compatibility could be the main reason why screen mirroring lags. But, before that, you need to know how to properly setup screen mirroring on Android.

Check If Devices are Compatible

Make sure the screen mirroring feature is up to date. Whether you have an app or it’s built into your phone, you should use the latest version. Incompatibility issues may result in an unreliable connection between your phone and other devices. Contact the manufacturer for more details.

If your phone is running on the latest operating system and it’s compatible with your TV, clear some space in your device. By clearing cache and deleting data on your phone, you’ll give more chances for other features to function well.

Go to Settings>Apps. Then, find the app in question. Select the app and then, you can find the Clear Cache and Clear Data buttons. Tap each to clear cache and data, respectively.

Alternatively, you can also go to Settings>Storage. Under Storage, you’ll get to see the summary of data consumption for videos, documents, photos, etc. Look for cached data and clear all app cache.

If you still encounter lag or problems using the stock screen mirroring feature of your device, try third party apps. Check out Scrcpy, AirMirror, Vysor, ApowerMirror, and so on. Check which one works for you.

To get more reliability when you project your screen to your smart TV, it’s good to use HDMI adapter. Plug your phone directly to the TV to get rid of the lag. With wireless connection, especially if you don’t an HDMI adapter, there is a great chance for delays.

So, how to fix screen mirroring lag? First, make sure that your phone and your TV/screen projector are compatible. Second, your system should be up-to-date. Finally, explore other reliable screen mirroring apps that will allow you to establish a more stable connection with your external device. We hope this article has helped you enjoyed uninterrupted streaming and screen mirroring on your television.