How Play WAV Files on Android Every Time?

Can you play WAV files on Android? Yes. Android supports playing WAV files since Android 4.1. Explore the ringtones in the /system/media/alarms and you can see that some of them are in .wav format, and they are working fine. So, if you have some trouble playing a file in .wav format, it could be that your native music player doesn’t support it or other reasons. No matter what the reasons are, the fact that it’s supported by Android since then, you should be able to play any WAV file. This will be solved in this article — read on!

The most common audio file is mp3. And, each time you want to download music or make an audio file, you should save it in mp3 format to make it play — literally in every music player and device. So, why need to play WAV files when you can just save and convert everything to mp3?

For maximum audio quality, music recording professionals use .wav format. It’s a very common audio format when you create a file on your PC. The WAV file format is a raw audio format created by famous companies, Microsoft and IBM. It’s an uncompressed lossless audio file so all the necessary information — audio data, sample rates, and bitrates — is retained. It definitely takes more storage than the lossy compressed MP3.

To be able to get the best audio quality of your recordings without losing any element from the original recording, you should save it in WAV file.

How to Play WAV files on Android?

As mentioned, Android has supported playing WAV files since Android 4.1 along with other file formats. This means you can get the best quality of your audio samples right on your Android device. But, how to successfully play WAV files on Android, every time? Of course, you’ll open it using a music player — your native music player, perhaps, or a third-party app.

Simply go to the WAV audio file you want to play and then, select it. If you have more than one music player app installed, it’ll prompt you to make a choice. However, if you only have a single music player or if you have set your preferred music player for these audio formats, WAV files will play with a single tap.

If you have a hard time playing WAV music files, it could be either your file is corrupted or your music player can’t play the file in .wav format. Remember, your Android phone may support encoding/decoding WAV files, but not all music players allow playing such format.

First, make sure that the player you are using really supports WAV file. You can do a quick search or check the release notes of that app to see whether it can play WAV or not. Google Play Music, for example, may not allow you to upload WAV files or play music in .wav format. So, if your default music player is Google Play Music, you won’t really play any WAV file at all.

If you have been playing WAV files before, yet all of a sudden you have this problem, you might need an update/downgrade. Most apps, in general, have available updates now and then — to fix bugs or provide additional features. Sometimes, an update is necessary to fix any problem with the app. However, if you have encountered this issue after an update, perhaps, you need to go back to the previous version. Sometimes, the upgrade isn’t stable yet, which may cause conflicts and some incompatibility issues.

Android gives you the freedom to use any app you want — for as long as it’s available for your Android version. This means you don’t need to stick to your native music player — because there are tons of great music apps out there. 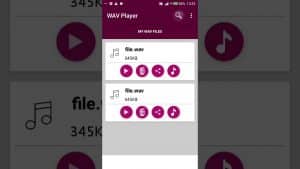 The most popular app that supports nearly any music format is VLC. It’s a free and open media player for different platforms. You can also use Remote Wave Free, especially for voicemail attachments on Android. The latter could be trickier to set up, hence, if you want to make your life easier, go for VLC.

You don’t necessarily need lossless uncompressed audio just to enjoy great music. If you happen to download any audio file in WAV format and you want to play it on your Android, you can convert it to MP3. There are tons of MP3 converter apps available. With this, won’t have any problem playing WAV file on your Android.

WAV audio files have the best quality, especially for music recordings. In general, you can play WAV files on Android, because this format has been supported since Android 4.1. Yet, if you have problems playing such a format, perhaps your music player doesn’t support the file format or you have a corrupted file.

Still, if you want to play audio files in .wav format, ensure your music player supports WAV. Or, you can also download VLC, and similar apps, to give you ease in playing WAV files. Furthermore, if you don’t need your audio files to be in WAV format and you only want great music on your phone, you can convert these files to MP3. With this, you won’t have any problem playing your music because MP3 is supported by nearly all music players available.

How to Return Sprint Airave